There are two main types of zones: pricing zones are used to define your prices, and are what your clients care about, and routing zones are about how you deliver cargo internally - either by defining area serviced by one of your hubs, or to define a smaller subzone serviced by a courier or team of couriers, or to specify a larger area in which you have your shipments delivered by a partner company (franchisor).
Both types are set up from the same page - Routing main menu, Zones submenu.

A common setup for a local courier company would look like this: 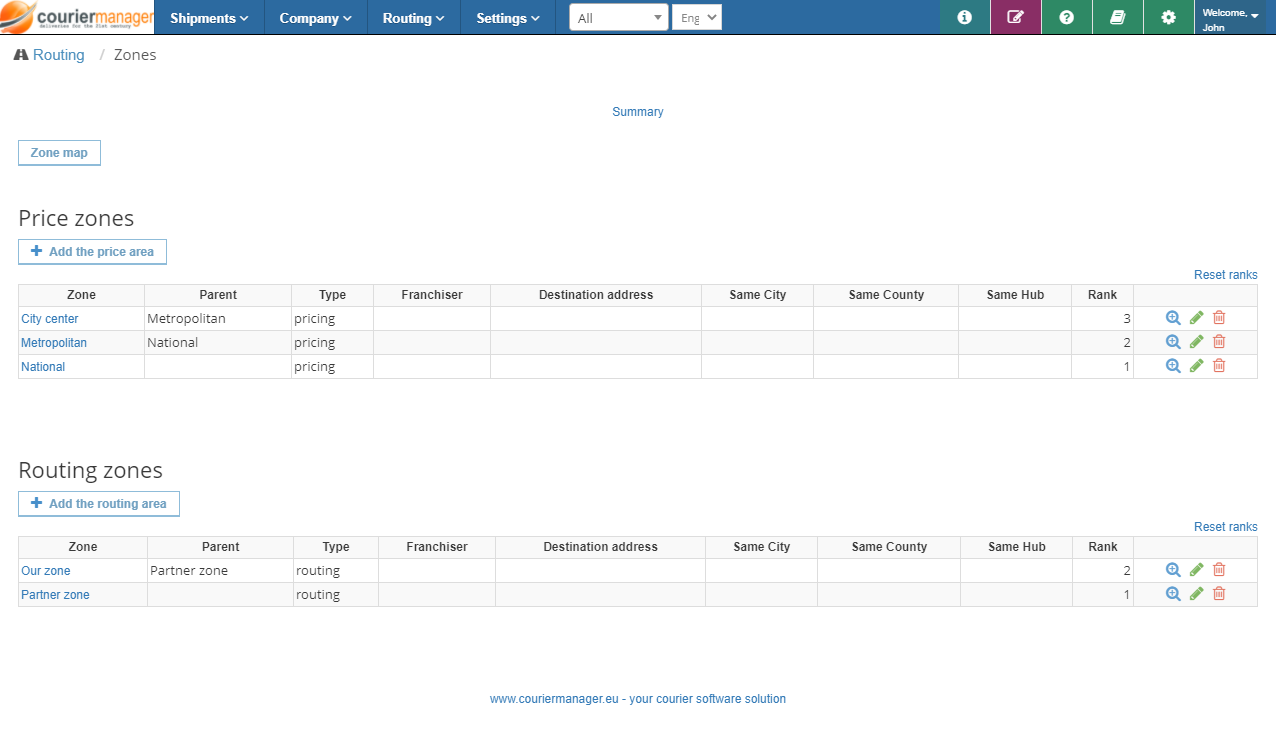 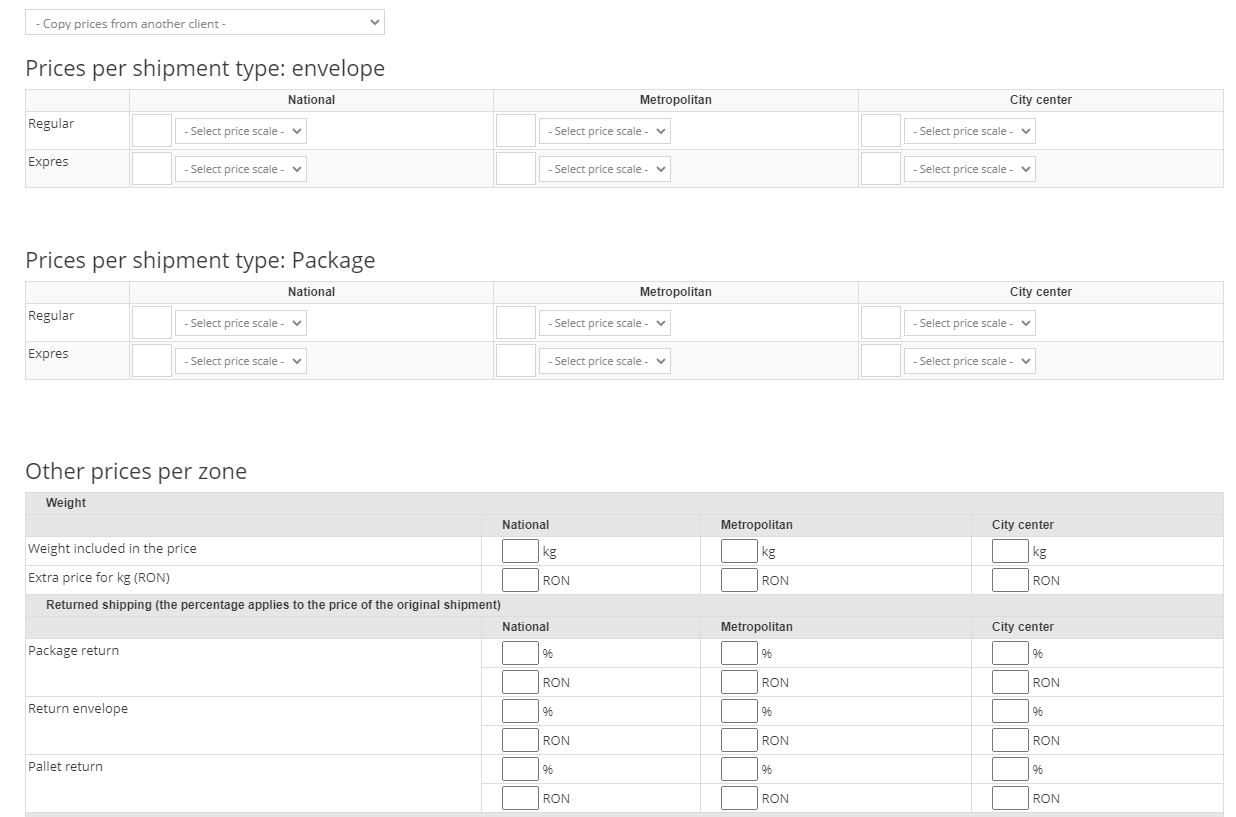 You can see that you have three pricing zones and two main services (Regular and Express), so will have to define six prices total. Not all of them have to be different, of course. But still, you should try to have as few zones and services as possible, to avoid having to define a lot of prices. Also a common mistake is mixing the two: zones are only to define the location of the shipments, and services define the quality of the service, for example how fast. it will be delivered. Many courier companies prefer to have only with one main service (called for example "Standard"), and  when necessary add any number of extra services for whatever they may offer. Extra services are just an option added to a shipment, and don't force you to define as many prices.

Defining the area covered by a zone

There are two ways of defining the area of zone. You can either draw it on a map, or list the countries/cities/provinces/zipcodes it contains. Both have their place. You may chose to define larger zones by listing provinces or cities, and small in-city zones by drawing, but it's not a rule. Using zip codes depends on whether the clients in your countries use them regularly.

Also to note is that each method depends on the quality of the data entered: if you list provinces/cities they will match only if the client uses the same spelling as you did. You can compensate for this by adding multiple spellings - no harm done if you do so (for example you can add "Targu Mures", "Tg Mures" and "Targu-Mures"). When drawing the area on the map, the system relies on finding the GPS coordinates for each address. We are getting better at this and for most countries we have much better than 99.9% hit rate. You may however live in a region in which our geocoding provider (currently Google) doesn't have very good performance.

To draw a zone on the map, first create it, then go to the "Zone map" button in the upper left corner of the zones page. Then chose the newly created zone in the select and click "Add polygon".

To define a zone by listing its contents click "view" on a zone (or its name), then look at the "Cities included in the zone" table:

The table above defines a zone that will contain any shipment that has Bucharest in either the city field or in the province field. Fields left blank will match any value.

You can create a catch-all zone by leaving all fields blank and clicking "Add" - it's actually recommended to do so for the largest zone, like "National" in our example.


You can mix and match - for example in the scenario above you may chose to define City Center and Metropolitan by drawing them, but National by simply adding the whole country. You can even mix the two methods in the same zone - add a whole of a city by name, and also add a neighboring area by drawing it.

An important thing to note is that for a shipment to be in a zone, both the sender and recipient address has to be in that zone. So in our example, if you have a shipment from the City Center to a Metropolitan location, the pricing zone will be Metropolitan. If you create a shipment with the sender in one zone, the recipient in another and there is no ancestor zone to both, the result will be undefined - the software can't find a zone to cover both sender and recipient.
This system allows you to create pretty complex structures, but it may require you to draw things on a paper first. A tip for testing your zone structure: in the view page of a shipment you have the sender price zone, recipient price zone, and (near the price) the actual shipment price zone. Check those first. Once your shipments fall reliably into the correct zone, move to the next step and define the prices.

If you have more than one zone that would fit, the one picked will be the one with the highest rank - usually the smallest, more specific zone. The system will try to autocomplete ranks as you create zones, but if you change your zone setup and don't want to manage ranks yourself, it's usually a good idea to click "Reset ranks" after changing zones and their parents.

Samecity/samecounty/samehub options allow you to define zones used for local deliveries. They are an edge case and usually unlikely to be useful for most of our clients, but for example if you would like to set up a fixed price for any delivery that is within the same city, regardless of the city, you would create a zone and mark it "samecity". Don't check them otherwise.

Routing zones are used to help you manage the operational side of your business. You define them the same as pricing zones. You usually work with sender and recipient zones separately - you want to know who should pick up a shipment and who will deliver it and, depending on your number of hubs and degree of automatization, you may even know the route it will take to get there. There are several uses for routing zones.

For companies with a presence in more than one city, routing zones are essential to define the area allocated to each hub. If for example you have a presence in each province of a country you will define a hub for each (from the Hubs menu in the Routing main menu), and the software will automatically create a routing zone for each hub. You will then define each one (either by drawing or by adding cities/provinces/countries), and this will allow the software to know the departure and arrival hub for each shipment. Both hub names are printed on the label. If you have a sorting hub, it can also very visibly print gate information based on destination hub so it will be easy to sort.

If you have a larger number of hubs, you will very likely want to keep track of transports between those hubs. To do so you can define regular routes in the Routes menu, and individual runs in Runs and Scheduled Runs. Since the software will know the destination hub and also the hubs that can be arrived at by any route, it will alert you when a package is loaded in the wrong transport.

You can define subzones for a hub's routing zone (just create a regular routing zone and set the parent). Those will also be printed on the label, and can be used to sort packages at the level of courier or courier team. Usually those will be smaller, either drawn on a map or defined by zip codes (or lists of smaller towns).

This goes nicely with our auto-routing features. A possible flow we suggest is to scan each subzone package to a courier as they arrive in the hub. Then when there's time to make the routes, if it's a smaller one-man zone just create a rollcart for that courier and optimize it. If it's a larger zone use the Auto-routing function in the Shipments menu - select all those shipments you've allocated to that courier, go to More actions, Auto-route, then select the couriers that work in that area. The software will automatically split the shipments to those couriers, create a rollcart for each and also optimize each rollcart.

Routing zones can be used to send shipments to be delivered by partner companies (we call all partner companies franchisors, whether they are big or small). If you are a local courier company but you want to send shipments nationally or internationally, you can just partner with another company and set up two routing zones - one in which you deliver yourself, and one in which shipments will be automatically sent to the other company through an API integration. The software will manage sending the info to the franchisor's system, will get back status updates including when the shipment is delivered, help manage Cash on Delivery amounts and much more. The system will know and be able to scan both our internal shipment number and the franchisor's, and you can choose if you want to print your label or directly theirs.
You can take a quick look at the list of companies we're already integrated with by going to the Franchisors page, clicking Add and taking a look at the "codes" field. This includes, of course, all companies using Courier Manager.  You can find more info on the section on integrating franchisors. If you want to partner with a company that is not there, it's ok - we have an open API which you can use to implement your own integration with any company.

Many courier companies use semi-independent contractors to service a certain area. In this case you don't need to do the above, since they don't use their own separate software platforms. Just create regular employee accounts in the software, and organize them by creating a hub and a franchisor for each company. The software will assist you with access permissions per hub (don't check the view_all_hubs right for them) and also by helping you calculate commissions - check out the "commissions" sections when adding a franchisor and also the commissions report in the Reports menu.